Yonah was a Romanian rabbi who opened a pushcart with his wife in Coney Island in 1890.There they became famous for the potato and kasha dumplings known as knishes (the “K” is pronounced). In 1910, Schimmel went into business with his cousin Joseph Bergerand opened the store that still sits on East Houston Street.

Over the decades, many notable fans have come by for a knish, including Eleanor Roosevelt, Barbara Streisand and Woody Allen, who filmed a scene from “Whatever Works” here with Larry David.

Today the shop, which is the last remaining knish bakery in Manhattan, is owned by Yonah’s great nephew, remaining a family business.

As the Lower East Side has changed over the decades and many of its Jewish residents have departed, Yonah Schimmel’s is one of the few distinctly Jewish businesses and restaurants that remain as a fixture of this largely departed culture and cuisine.

As cited in The Underground Gourmet, a review of Yonah Schimmel’s in a collection of restaurant reviews by Milton Glaser and Jerome Snyder, “No New York politician in the last 50 years has been elected to office without having at least one photograph showing him on the Lower East Side with a knish in his face.”

A knish (/kəˈnɪʃ/ pronounced knysh) is an Eastern European snack food made popular in North America by Jewish immigrants. A knish consists primarily of potato, onion and seasoning filling wrapped with a thin layer of dough that is baked, never fried. The best hand made knishes can be purchased at the original store in New York City or online. Yonah Schimmel’s is the oldest family owned and operated Knishery in America

In the most traditional versions, the filling is made entirely of mashed potato. Some of our most popular savory knishes include cabbage, kasha,
(buckwheat grain) or spinach. More modern varieties of fillings feature sweet potatoes, broccoli, jalapenos and more. Real knishes are round, not square and never fried. Yonah’s sweet cheese knishes consists mostly cheese coupled with your choice of fruit filling and wrapped in dough. Pre order cocktail size knishes or enjoy our regular size knish as a meal.

Call in advance for party orders 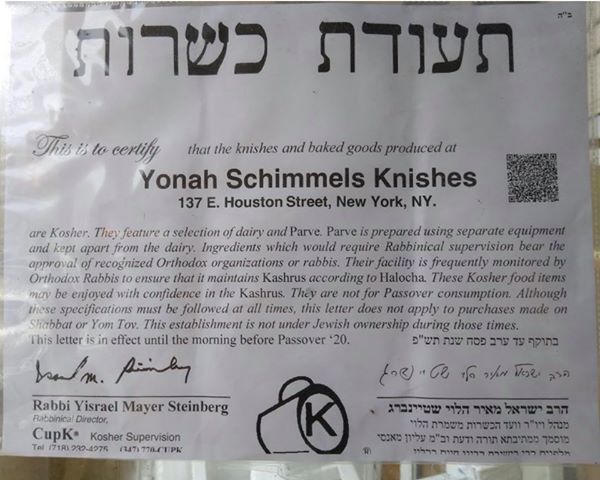 Get Yonah Schimmel Knishes Anywhere in the US

For over 100 years, our customers have been coming to our little restaurant on East Houston Street. Now we ship our knishes to anywhere in the continental US in partnership with our friends at Goldbely and shipping is always FREE!!